I Am Always With You

The Fable of the Dragonfly

The Story of the Dragonfly

Down below the surface of a quiet pond lived a little colony of water bugs. They were a happy colony, living far away from the sun.

For many months they were very busy, scurrying over the soft mud on the bottom of the pond. They noticed that every once in a while one of their colony seemed to lose interest in going about its business with its friends. Clinging to the stem of a pond lily, it gradually climbed out of sight and was never seen again.

“Look!” said one of the water bugs to another. “One of our friends in the colony is climbing up the lily stalk. Where do you suppose she is going?” Up, up, up it went slowly. Even as they watched, the water bug disappeared from sight. Its friends waited and waited but it didn’t return. “That’s funny!” said one water bug to another. “Wasn’t she happy here?” asked a second water bug. “Where do you suppose she went?” wondered a third. No one had an answer. They were greatly puzzled.

Finally one of the water bugs gathered them all together. “I have an idea” he said. “The next one of us who climbs up the lily stalk must promise to come back and tell us why they left and where they went.” “We promise,” they said solemnly.

One spring day, not long after, the very water bug who had suggested the plan found himself climbing up the lily stalk. Up, up, up he went. Before he knew what was happening, he had broken through the surface of the water, and fallen onto the broad, green lily pad above.

He was so tired, and the sun felt so warm, that he decided to take a nap. As he slept, his body changed and when he awoke, he had turned into a beautiful blue-tailed dragonfly with broad wings and a slender body designed for flying.

He couldn’t believe the startling change he saw in his body. His movement revealed four silver wings and a long tail. Even as he struggled, he felt an impulse to move his wings. The warmth of the sun soon dried the moisture from the new body. He moved his wings again and suddenly found himself up above the water. He had become a dragonfly.

Swooping and dipping in great curves, he flew through the air. He felt exhilarated in his new environment. By and by, the new dragonfly lighted happily on a lily pad to rest. Then it was that he chanced to look below to the bottom of the pond. Why, he was right above his old friends, the water bugs! There they were, scurrying about, just as he had been doing some time before. Then the dragonfly remembered the promise: “The next one of us who climbs up the lily stalk will come back and tell where he or she went and why.”

Without thinking, the dragonfly darted down. Suddenly he hit the surface of the water and bounced away. Now that he was a dragonfly, he could no longer go into the water. “I can’t return!” he said in dismay. “At least I tried, but I can’t keep my promise. Even if I could go back, not one of the water bugs would know me in my new body. I guess I’ll just have to wait until they become dragonflies too. Then they’ll understand what happened to me, where I went, and this wonderful new life I’ve been given.” And the dragonfly winged off happily into its wonderful new world of sun and air.

Want to Know More About The Dragonfly?

“Dragonflies: Learning to swim before they fly“

Dragonflies are nature’s little aerial acrobats.  Likened in bodily shape to a helicopter with numerous maneuvers, they can fly straight up and down, forward and backward, hover and even mate mid-air

There are 7,000 species of dragonflies and mayflies, the dragon flies smaller cousin, in the world.

A dragonfly has a life span of more than a year, but very little of that life is actually as an adult dragonfly. There are three stages of the dragonfly life cycle, the egg, the nymph, and the adult dragonfly. Most of the life cycle of a dragonfly is lived out in the nymph stage where they aren’t seen at all, unless you are swimming underwater in a lake.

Once the dragonfly eggs hatch, the life cycle of a dragonfly larva begins as a nymph. A nymph looks like an alien creature. It hasn’t grown its wings yet and has what looks like a crusty hump hanging onto its back. Dragonfly nymphs live in the water while they grow and develop into dragonflies. This portion of the dragonfly life cycle can take up to four years to complete, and if the nymph cycle is completed in the beginning of the wintertime, it will remain in the water until spring when it is warm enough to come out. 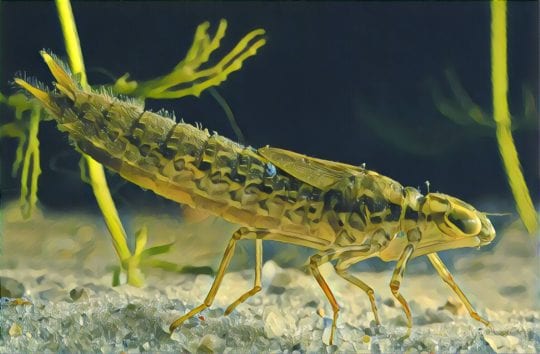 Once the nymph is fully grown, and the weather is right, it will complete the metamorphosis into a dragonfly by crawling out of the water up the stem of a plant where it can hang on safely.  The nymph will shed its skin and begin its exit into a young dragonfly. The skin that the nymph left behind is called the exuvia and you can find the exuvia still stuck to the stem for a long time after the dragonfly has left it.

Once the dragonfly leaves the exuvia, it is fully grown. The dragonfly will hunt for food and begin to look for a mate.  Dragonflies are flat-out terrifying if you’re a gnat, mosquito, or other small bug. They don’t simply chase down their prey. Instead, they snag them from the air with their feet in calculated aerial ambushes. Dragonflies can judge the speed and trajectory of a prey target and adjust their flight to intercept prey.   The dragonflies’ ability to rip apart prey takes their predatory prowess to another level.

Dragonflies are in the order Odonata, meaning “toothed ones” due to their serrated mandibles. When hunting, dragonflies catch prey with their feet, tear off the prey’s wings with their sharp jaws so it can’t escape, and consume their prey all without needing to land. . . .

Thankfully, dragonflies can’t bite humans. The vast majority of species don’t have mandibles strong enough to break our skin, so its safe to experience these creatures in nature with out the worry of an ambush.  Every creature is amazing-from humans to insects, there are numerous wonders to experience.

Surviving Suicide Grief: “Does the Pain Ever End?”

A Short Animated Video-“I Had a Black Dog, His Name Was Depression”

Suicide is Not a Choice: Surviving Infinite Grief After the Suicide of My Child

Coping with Regret and Guilt After Your Child’s Death by Suicide: “I Want to Believe”

A Song About Losing My Child-“You’re Free Now Child”

A Song About Losing My Child-Lullaby for Dylan

Get new Chronicles Posts delivered to your inbox.

Follow My Forever Son-Chronicling Grief, Hope, and Healing After the Death of My Son By Suicide on WordPress.com